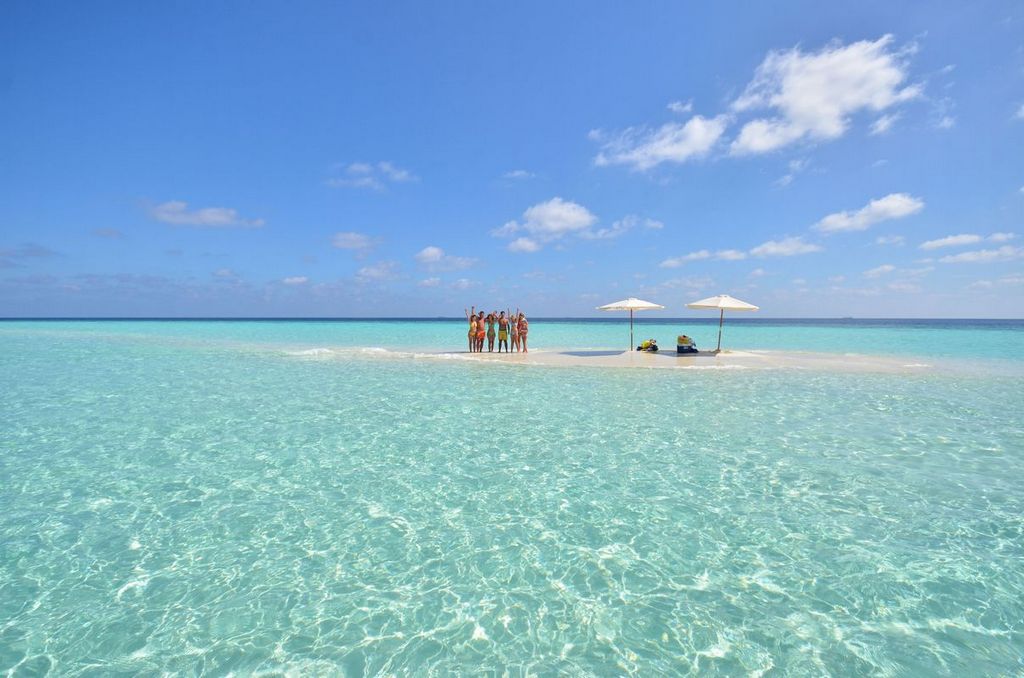 Ukulhas is my second most visited island after Rasdhoo – 6 times in the last 3 years. I like it because of the beach and house reef. 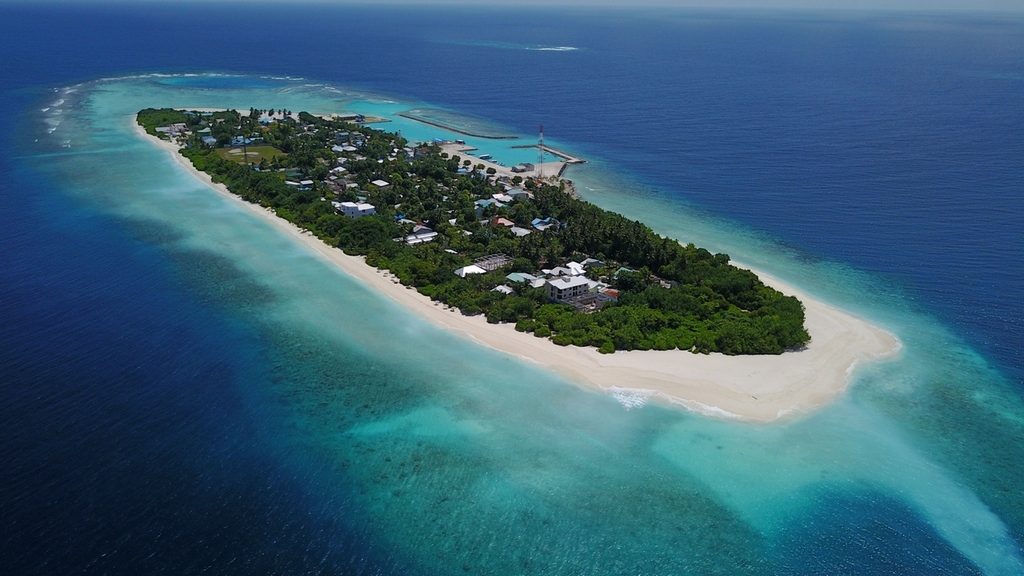 Beach and house reef on Ukulhas

The beach is the main attraction of Ukulhas. Its length is almost 1 km! Therefore, it occupies almost the entire western part of the island. Some hotels have direct access to the beach, but there is no sea view from the room. There are a lot of sunbeds and umbrellas. You can comfortably be under the shade of trees. The beach is regularly cleaned, like the rest of the island. Despite a large number of tourists, there is enough space for everyone. Not like on Rasdhoo or Thoddoo, where there really may not be enough sunbeds. 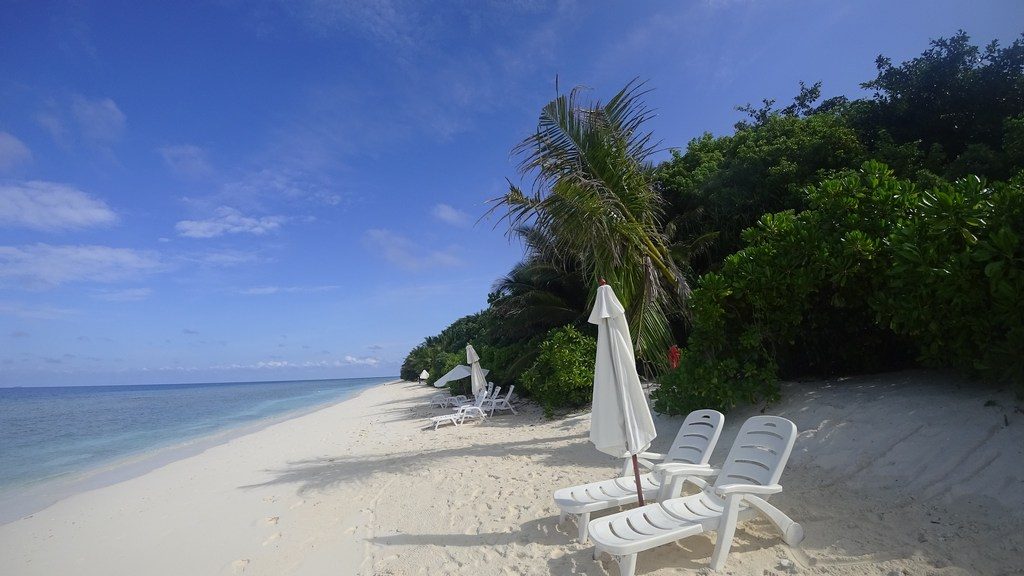 But this rule applies only to the period of Nov – Apr. The rest of the time, waves and currents carry a large amount of dead coral. Locals can’t take them of because there are too many of them. Also, during off-season tides are usually higher, so most of the beach is under water and you can no longer go from one end to the other. Depends on times of the year, the size of the beach can change, for example, in April, the southern part almost completely disappears. The reason is the change in wind direction and the absence of an external reef, which serves as a barrier to debris and waves. 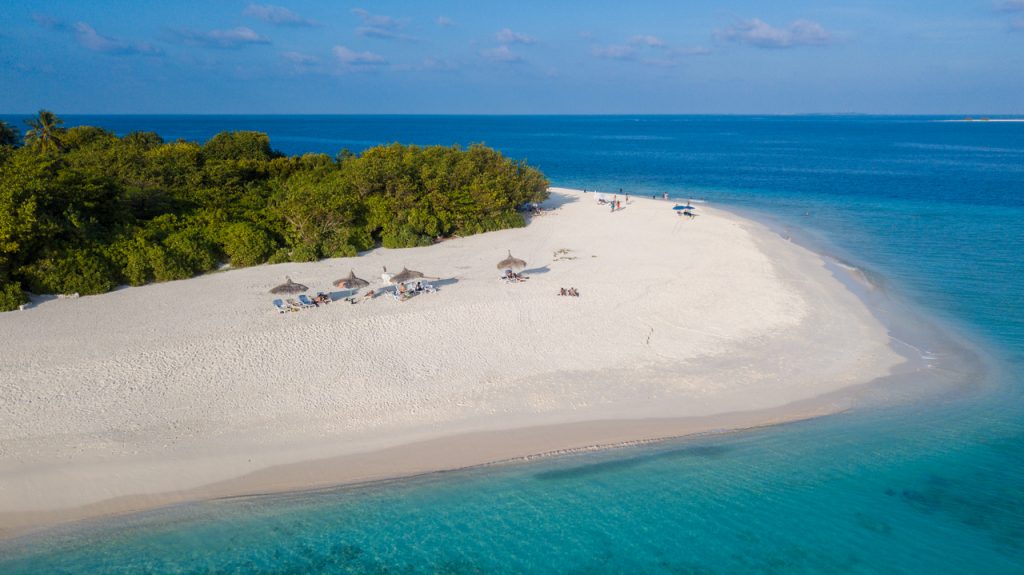 This island is a perfect place for families with small children, because the distance from the beach to hotels is a maximum of 100 m. Ukulhas is very popular among Italians, about 80% of tourists are from there.

There is almost no garbage on Ukulhas, as on many local islands. Moreover, the island is considered one of the most environmentally friendly in the Maldives and in 2014 received the award from the government. 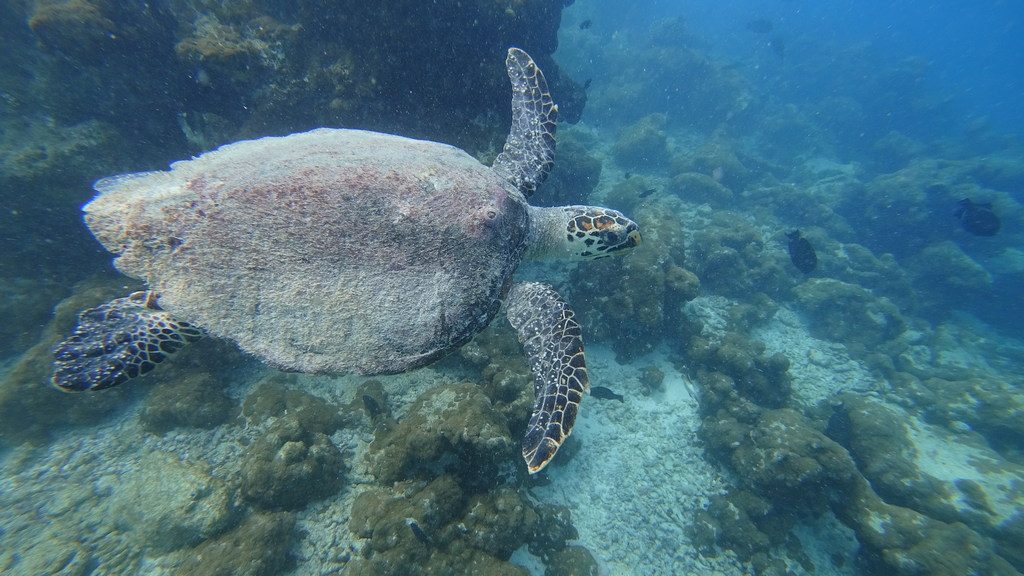 Opposite the bikini-beach there is a long and beautiful house reef with live soft and hard corals. Many fish, including huge schools of parrot fish, can be seen during a snorkel. Also, almost every day you will see stingrays, small cuttlefish, turtles and octopuses. Sometimes there are even mantas! I saw only once mantas during off-season. 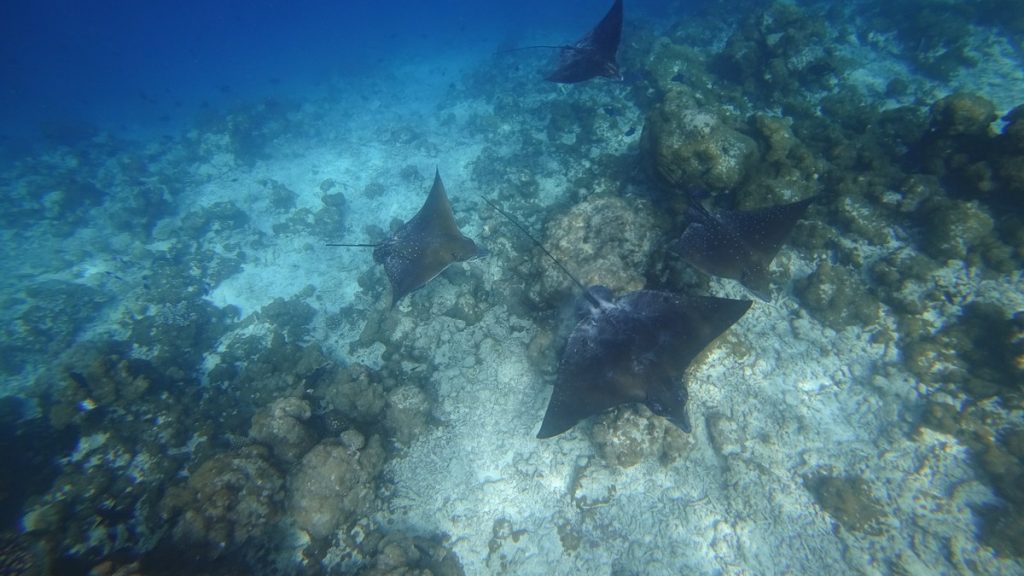 Ukulhas is home to sea turtles. Once I saw three (!) turtles there at once. This can only be seen on snorkelling safaris on other reefs.

In the northern part of the island there is a lagoon with a coral reef. A couple of years ago there were some alive corals, but not so long ago I swam there and no sharks, no stingrays, no live corals, only some fish.

Truly large schools of fish, living corals and manta rays can only be seen during a snorkelling safari. 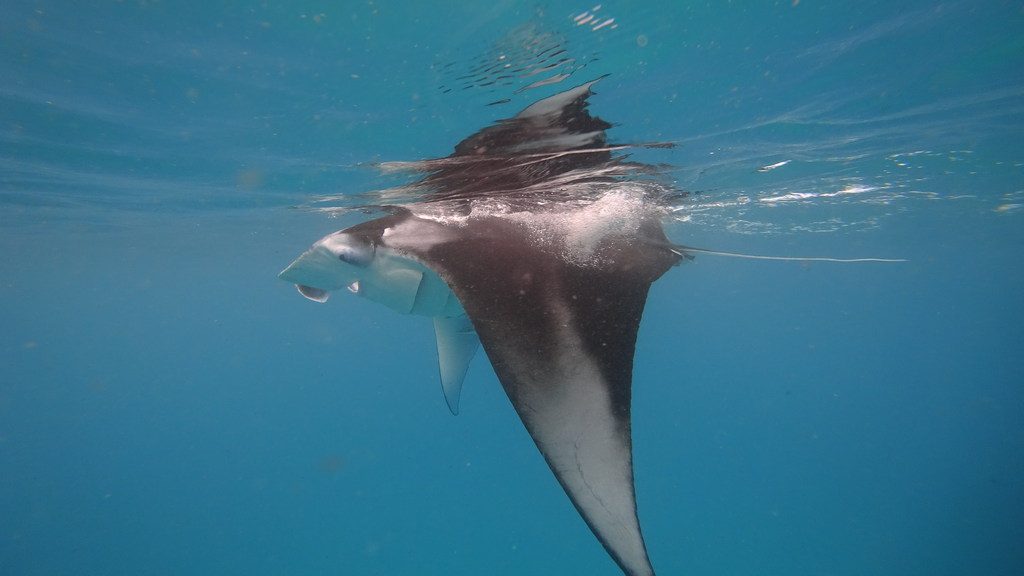 Between Ukulhas and Mathiveri there is a lagoon, where up to 20 mantas gather together! This is the only place in this area with manta rays. Therefore, tourists often come there both from local islands and from resorts.

How to snorkel with manta rays? Mantas are very intelligent and friendly animals that if they feel threatened, they will never come to you. What to do in this case? It’s simple, as soon as you jump into the water and see mantas, just do not rush and swim toward them very carefully and wait a bit. If the manta feels that you are not a threat, it will come to you. Chasing manta rays is the last thing you need to do because it will be faster than you in any case. 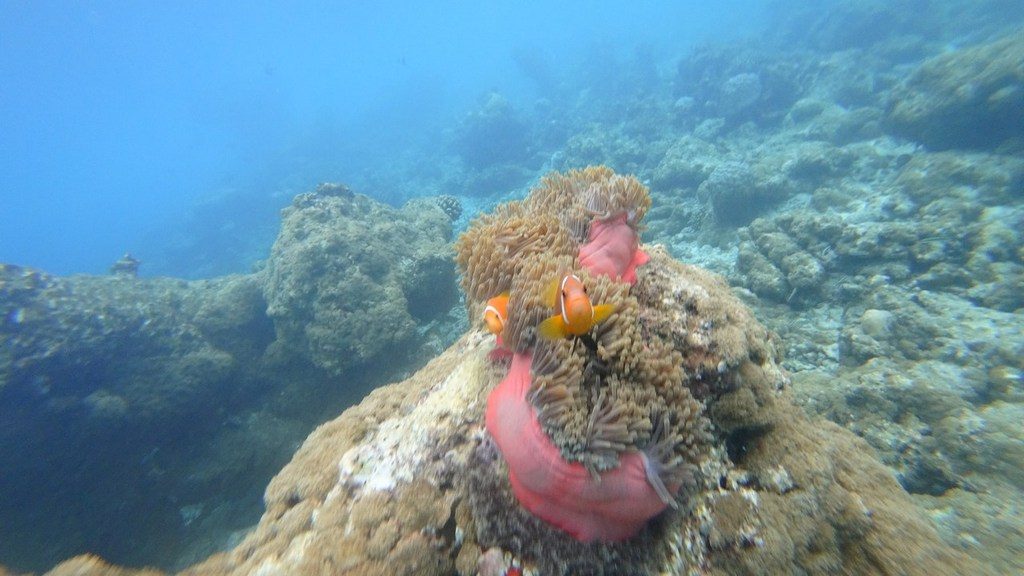 Any snorkelling is not a sprint, but a marathon that requires patience and endurance.

There was such a story, I went on a snorkel with mantas. In the same place was a group of tourists. Because of the rush, the manta always sailed away from them and sailed to me, because as soon as I jump into the water, I just waited. They swam so close that I could touch them. 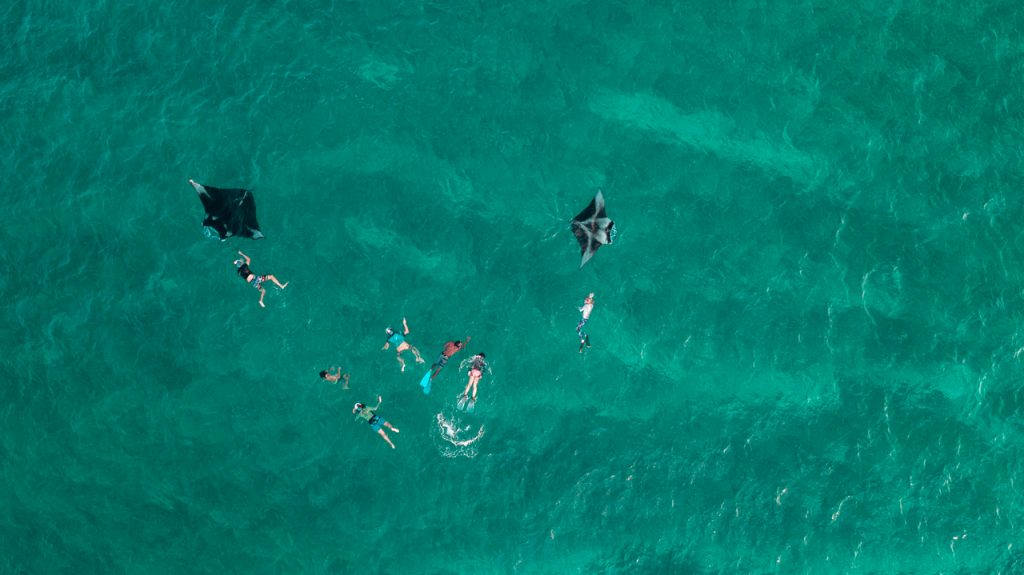 Life-hack: do not try to touch the mantas, it will touch you if it feels that you will not harm it.

Due to its size (wings up to 6m.), It can scare you, but do not worry. Their main food is the smallest plankton. Therefore, it certainly will not swallow you!

Over the past 4 years I have seen hundreds of manta rays, so I can say with confidence that following above rules will help you get to know these marine giants closely. 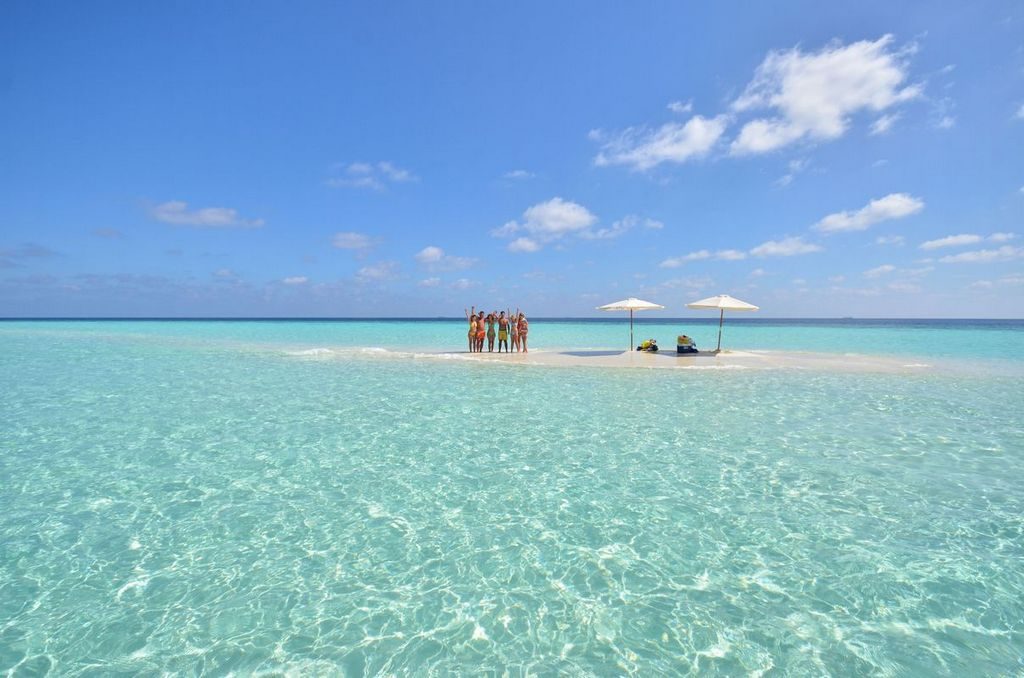 What else to do on Ukulhas?

I would say that this is something between a sandbank and a desert island. They do not organise trips from Ukulhas because of the poor beach and inconvenient entrance. For these purposes, tourists are taken to uninhabited islands near Rasdhoo. 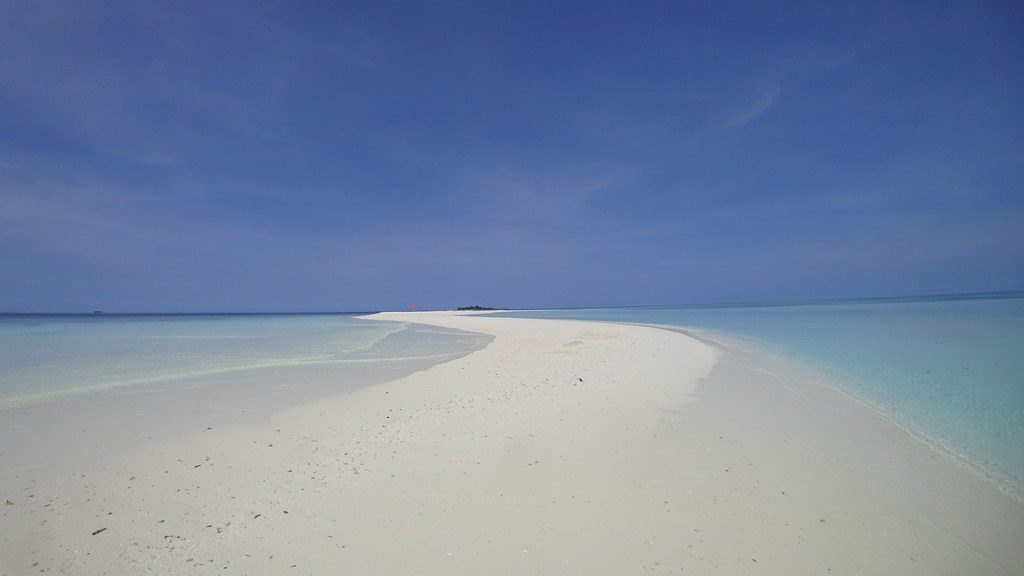 In the Ukulhas area there are at least 5 sandbanks that are available at different times of the year. Mostly tourists are visited three of them. I visited all of them at different times. Such places are a unique Maldivian experience where you can feel yourself like Robinson Crusoe, being cut off from the outside world!

The length of one of them is approximately 100-150 m and is available year around. There is cool house reef with plenty of fish, stingrays and even turtles. Visibility – up to 40 m! I was not able to fully explore it, because at the end the current becomes strong, so I had to go back to a sandbank. 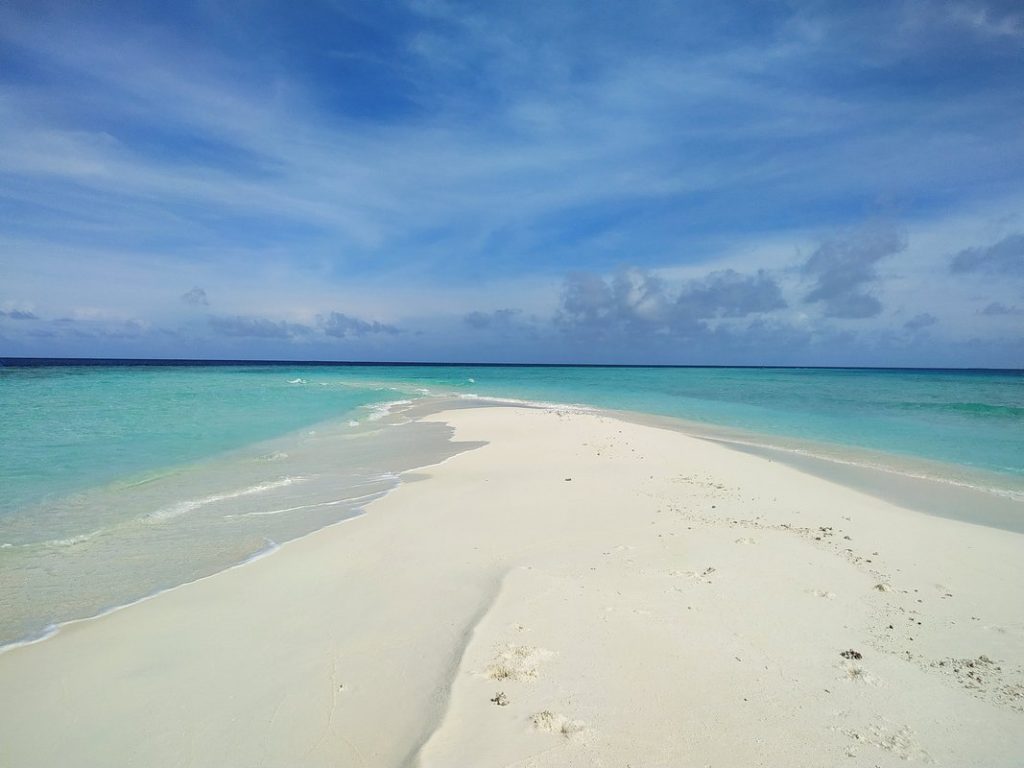 Never swim alone in such places! It may be dangerous! Every year, in Maldives, tourists are taken to the ocean by the current. Some of them can’t be rescued

Sometimes tourists from nearby resorts are brought to this sandbank, so it can be crowded or no one at all.

There is no palms, so you must take umbrellas and a portable refrigerator with you (the hotel provides). 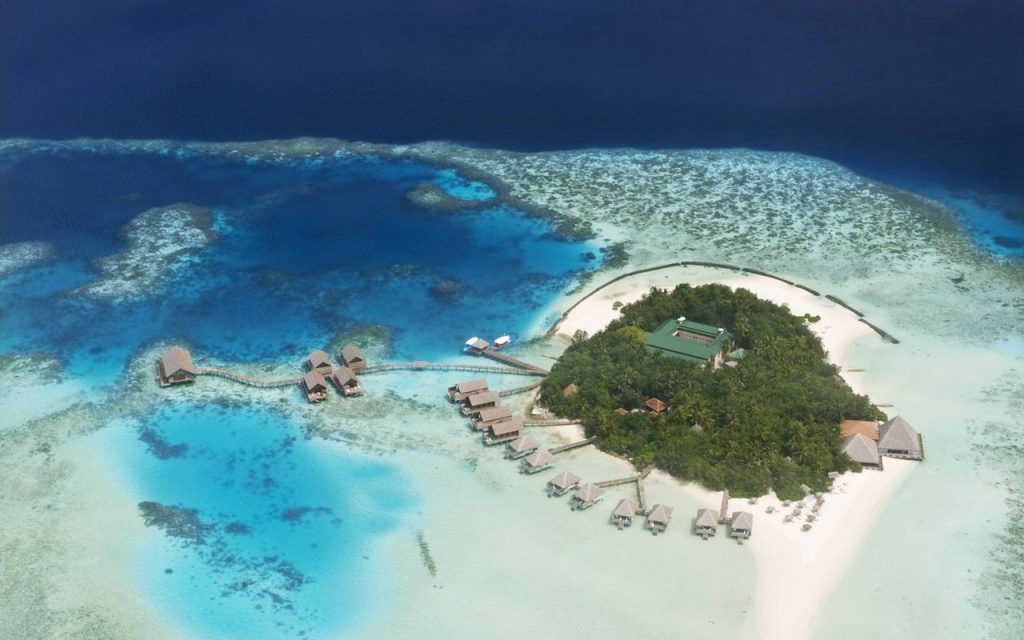 From Ukulhas, trips to resorts such as Nika Island, Gangehi, Ellaidhoo by Cinnamon can be organised on request. The cost depends on the resort. The hotel only charges for transfers to / from the resort. But entrance fee is paid separately at the resort (about $ 100-150 per person).

The price includes the time spent on the island (usually from 10:00 to 17:00), towels, food and drinks (depending on the resort), the ability to visit bars, restaurants, SPA and other resort amenities

Access to the villas is at an additional cost. 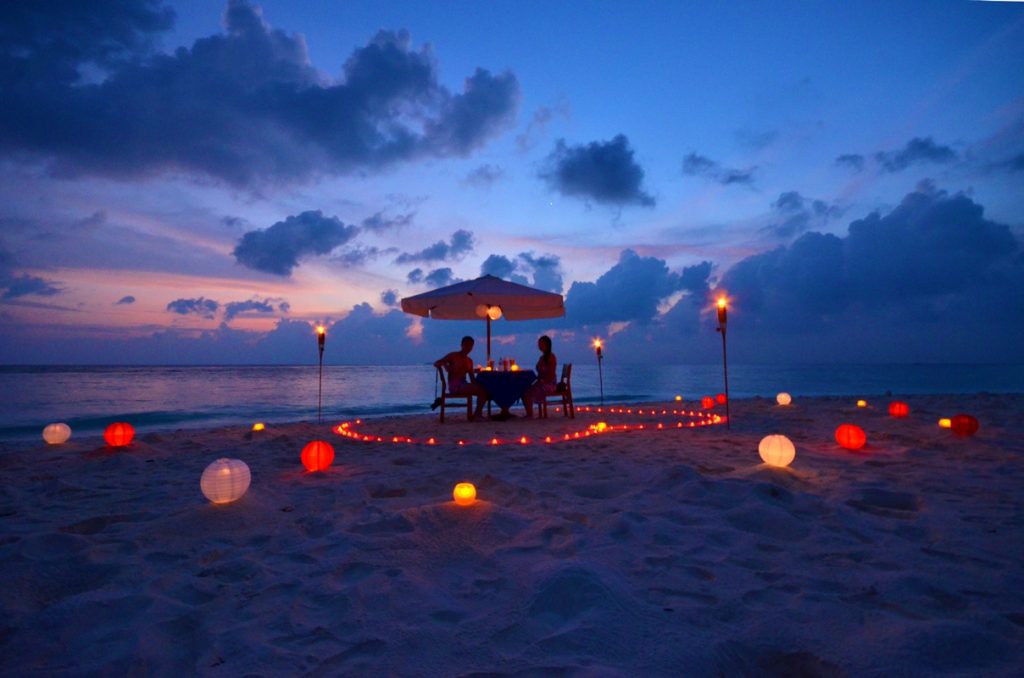 Hotels can organise two types of dinner: on the beach and on the sandbank. The cost of the first is about $ 100 per pair, the second is about $ 250. The high cost of sandbank dinner is because of high cost of logistics.

On the beach, unlike Rasdhoo, you can organise a fairly private candlelight dinner for two. No one will disturb you. 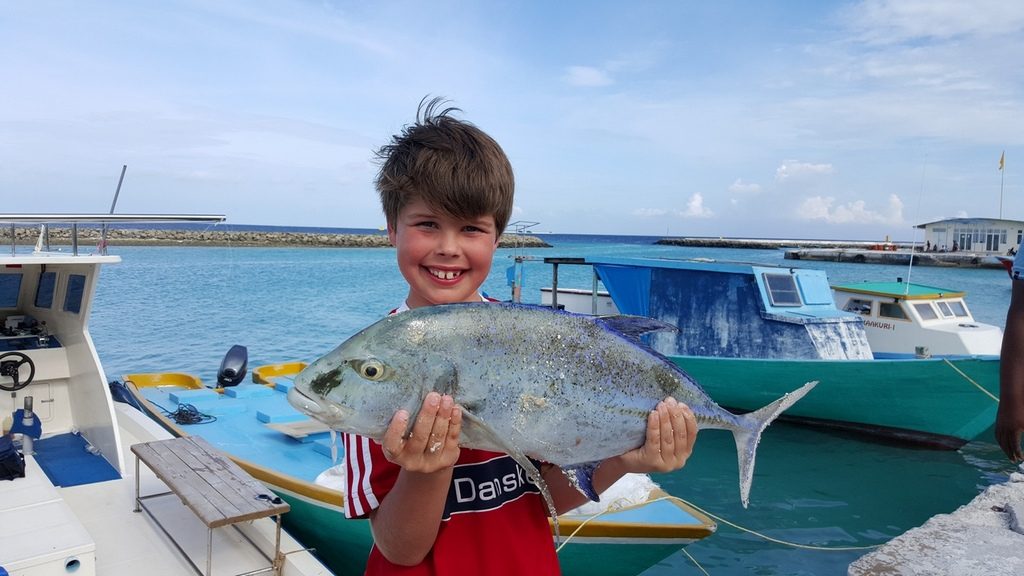 Ukulhas is one of the few local islands where such activity is organised because it requires knowledge of the places and availability of special speed boat that can sail to a depth ocean.

Such tours are always booked in advance.

Safari with dolphins. Not regularly arranged because the natural habitat of dolphins is far from Ukulhas. However, I saw them several times along the way from the sandbank. They are not very friendly and do not allow to swim close to themselves.

Diving. There is only one dive centre on the island. This is due to the limit of dive spots nearby. Usually, divers go to Rasdhoo or other islands of the central and southern Ari Atoll.

Night fishing. Even amateurs can try to catch a fish. It is very rare that anyone comes back without any single fish. A catch can be prepared at the hotel. 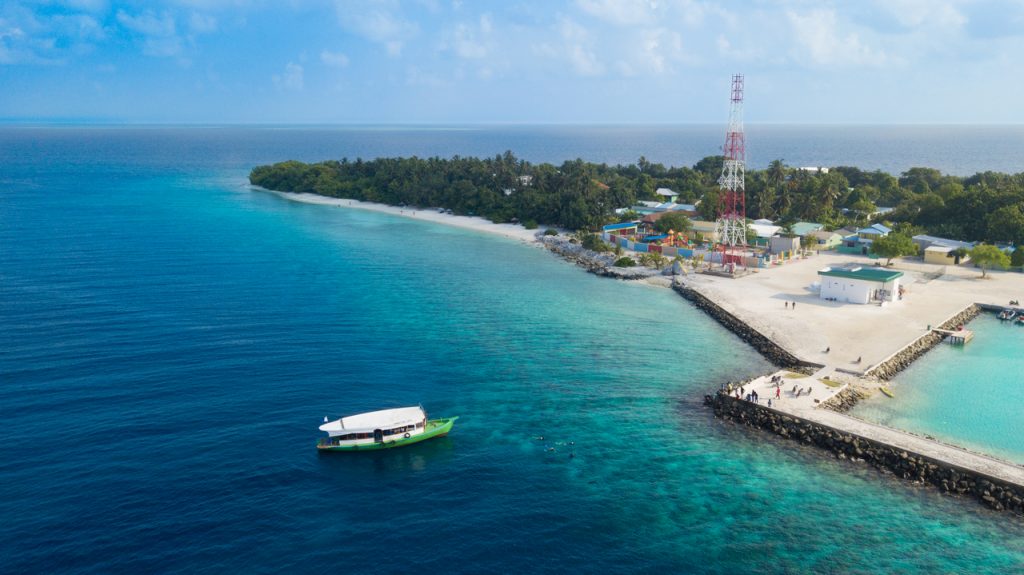 The island has everything you need: a hospital, a school, a fitness centre and a football field, several shops and cafes (now there are 5 of them, including a Thai restaurant). Near the pier is a small mosque. Although there are few shops on the island, only 4-5, and the choice of products is limited. However, here you can buy drinks, fruits, cookies, etc.

Local cuisine is not much different from other local islands. All dishes are mainly Indian, Thai, Western cuisine, with local characteristics. Among other dishes, hedhica is served as an appetizer: grilled fish with grated coconut, lime juice, onions and chili. In addition, you can taste bajiya (pies stuffed with fish), Kulhi boakibaa (fishcake), Keemia (fish roll), gulha (fish balls), and masroshi (small pancake stuffed with fish).

After the rain, the streets can literally turn into rivers! So be prepared for this. 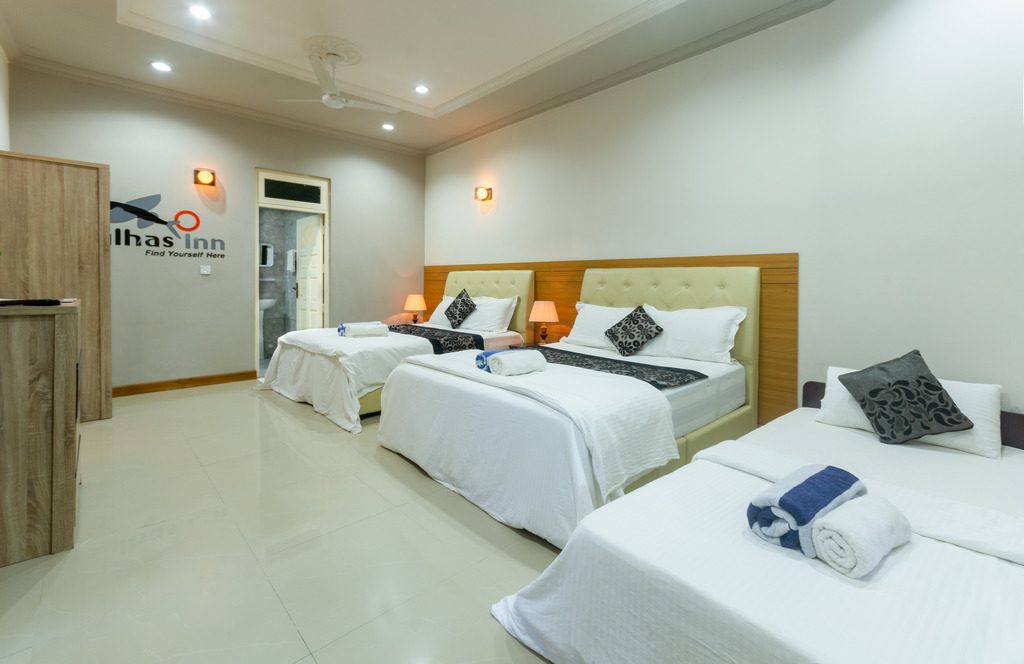 About 30 hotels and guest houses of various price categories are open on the island. During high season, the cost starts from $ 60 and up to $ 150 per night! On the island there is something like a union of hotel owners and guest houses that keep prices at about the same level and do not lower them.

I always stay at Ukulhas Inn – one of the first hotels in Ukulhas, which has been open since 2015. Its main features are a high level of service, reasonable prices and family rooms with up to 4 beds!

For three years of working with them, tourists from more than 30 countries have been welcomed. Everyone was satisfied. And if there were minor misunderstandings,they were all quickly resolved as soon as possible. 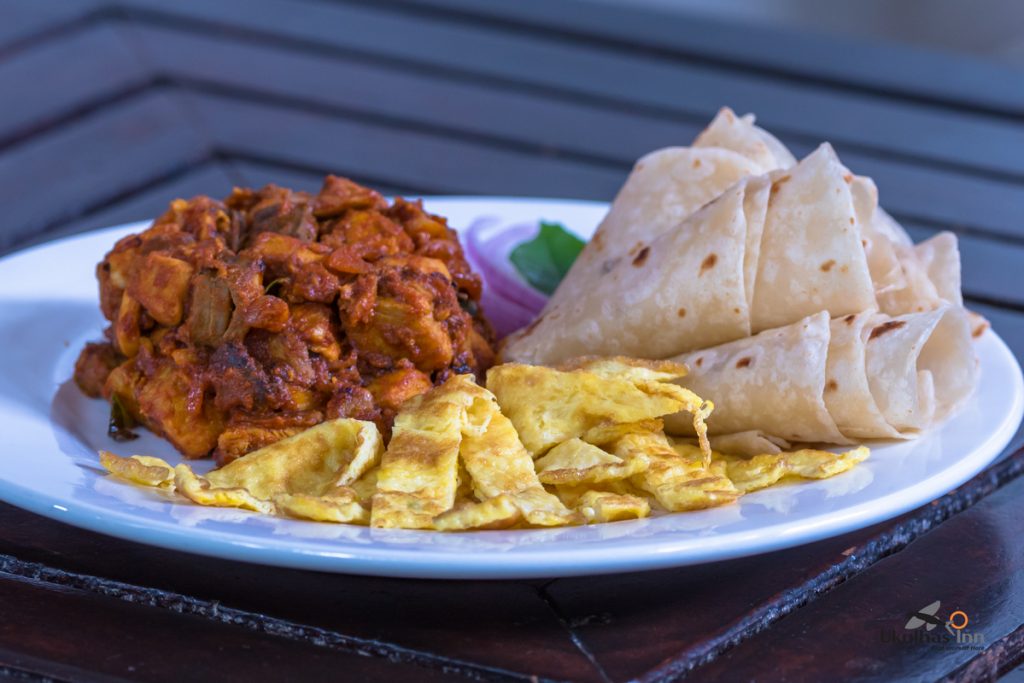 According to Trip Advisor reviews, you will see that the hotel is in the TOP 5 mini-hotels on Ukulhas.

Because of exclusivity, I can offer you really good prices for accommodation, meals, excursions. 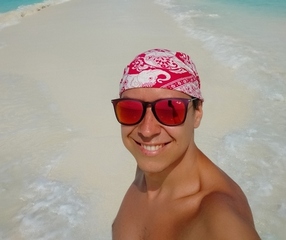 Welcome! My name is Alex and since 2015 I have been “sick” with Maldives. In 2016-2017 I lived in Maldives and worked at a local travel agency. I managed to personally visit 15 local islands and 10 resorts.

Since 2017, I have been organizing holidays for couples, families and groups. More than 300+ clients from 60 countries have used my service.

Contact me for a free consultation and help with a personal tour to Maldives!